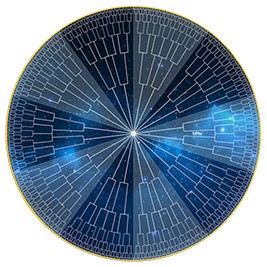 Bifurcation resp. its cyclic form, proposed as the global invariant where “an omega of mathematics coincides with an omega of biochemistry” [P.R. Sarkar]

The present paper proposes an interpretation of quantum mechanics whereby the matter wave and its eigenstates are formed through an underlying, bifurcative self-interaction of the quantum field. Subsequently it will be shown that based on the latter the proton-to-electron mass ratio can accurately be calculated.

Introduction: Microvita, a renaissance of the Action Principle of physics, with applications in biochemistry and medicine

Despite breakthrough advances in fields such as paleobiology, biochemistry and genetics, the deeper origin and nature of life remain enigmatic. For example, the swiftness at which beneficial mutations appear to have spread in an entire population (fixation) is unexplained. Techniques such as fast sequencing and Crispr-Cas, while showing great insight and skill, at the same time reveal once more the perplexing complexity of the machinery of life at a fundamental level, for which there exists no integrative approach or model.

It is a trend especially in science, to consider that which we can’t detect directly as not evidence based, and therefore irrelevant. We forget however that an obvious and seemingly visceral concept such as “energy” is entirely abstract. Even few physicists realize that energy cannot be measured – it is an inferred, entirely abstract quantity that turns out to be conserved during a physical process or interaction1.

A yet greater and more comprehensive abstraction than energy, widely introduced in physics but less known to the general public is that of “action”, that is, the Action Principle (resp. Principle of Least Action). In the words of Jean le Rond d’Alembert, an 18th. century French philosopher, “If one could grasp the whole Universe from one viewpoint, it would appear, if it is permitted to say this, as a unique fact and a great truth”2. The Action Principle presents just such a grasp of the Universe, allowing to formulate laws of physics purely based on mathematics. However, famous physicist Louis de Broglie, in his ground breaking and Nobel winning 1924 paper noted: “Nevertheless, action is a very abstract notion, and as a consequence of much reflection on light quanta and the photoelectric effect, we have returned to statements on energy as fundamental, and ceased to question why action plays a large role in so many issues”3. This, in fact is a visionary statement on how physics, and arguably science in general has developed over the century since.

Our present challenge is therefore to extend this idea, that same “grasp on the Universe”, not only to physics, but to include life itself.

Such a renaissance of the Action Principle, especially (but not exclusively) aimed at biochemistry and genetics, as well as psychology and sociology, was proposed by the contemporary Indian philosopher and social revolutionary Shrii P.R. Sarkar (1921-1990), which he referred to as “Microvita”. It would be fair to recognize that besides the very detailed, purely “technical” aspects Sarkar applied a considerable deal of psychology obviously to break away from the prevailing (scientific) doctrine which is motivated by seeking self-consistency rather than seeking truth. P.R. Sarkar’s Microvita Theory, which is based on vastly deepened and extended application of the Action Principle is, in his own words, a “new line of thinking”, both with regard to philosophy and physics, and evidently with regard to bio-chemistry.

It’s ramifications, challenges and opportunities in said fields are many and far-reaching, as detailed in Sarkar’s collected discourses, “Microvitum in a Nutshell”4. Sarkar empathically states that microvita should be studied in the mind (intuitional science) and in the lab (physical science).

Researchers are invited and encouraged to submit papers to help forward Microvita Science and its practical uses in said fields, as well as in medicine, agriculture and environmental care. The proposed properties of microvita (referred below) can serve as a framework and guideline. A physics-oriented paper5, published by The Gazette of Medical Sciences, shows how an extended interpretation of the Action Principle (through a moderate re-interpretation of the quantum field’s self-interaction) could explain not only mass but also structure in the sub-atomic and atomic world.

The various functionalities of microvita specifically in the realm of human life were exemplified by Sarkar through so called “luminous bodies” (disembodied minds). This is arguably the field of para-psychology. This could be interpreted in that if during life the mind is colored and dominated by a certain propensity closely associated with a specific microvitum, this coherent state will remain intact for some time after physical death until its momentum is exhausted.

The graphic at the top illustrates the “bifurcation” at the most fundamental level of creation, in this case related to the hidden or simultaneous cycle (Purusa in philosophy). Research shows how this invariant, primordial state evolves external matter waves and structure such as the “inital form of carbon atoms”. It is proposed that this is where “an omega of mathematics coincides with an omega of biochemistry” [P.R. Sarkar]

Please direct any enquiry or submit papers to: info@thegms.co.

Submit Paper
Editorial Policies
Article preparation guidelines
Article processing charges
We use cookies on our website to give you the most relevant experience by remembering your preferences and repeat visits. By clicking “Accept”, you consent to the use of ALL the cookies.
Cookie settingsACCEPT
Manage consent

This website uses cookies to improve your experience while you navigate through the website. Out of these, the cookies that are categorized as necessary are stored on your browser as they are essential for the working of basic functionalities of the website. We also use third-party cookies that help us analyze and understand how you use this website. These cookies will be stored in your browser only with your consent. You also have the option to opt-out of these cookies. But opting out of some of these cookies may affect your browsing experience.
Necessary Always Enabled
Necessary cookies are absolutely essential for the website to function properly. This category only includes cookies that ensures basic functionalities and security features of the website. These cookies do not store any personal information.
Non-necessary
Any cookies that may not be particularly necessary for the website to function and is used specifically to collect user personal data via analytics, ads, other embedded contents are termed as non-necessary cookies. It is mandatory to procure user consent prior to running these cookies on your website.
SAVE & ACCEPT
error: Content is protected !!